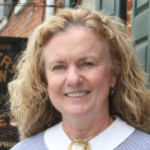 Tuesday, March 10, 2020
at Patton Hall Officers' Club,
214 Jackson Avenue, Ft. Myer, VA  22211
(take the elevator to the right as you enter the building or
take the stairs to the left up one level to the first floor)

8 pm: Lecture ($5 for lecture only)
Reservations Due By March 3, 5pm ET
(cancellations after the due date are non-refundable, as we must pay for the dinners regardless of the actual attendance)

SEE THE INSTRUCTIONS TO THE RIGHT OF THIS POST TO MAKE AND PAY FOR RESERVATIONS OR VISIT  http://cwrtdc-meetings.blogspot.com/
If you have any problems making reservations online or would like to know about alternatives to making reservations or payments online, please email admin@cwrtdc.org.
Non-CWRTDC members must make reservations and remit payment online

The Shriver House in the historic district of Gettysburg is the perfect setting to tell the "civilian" side of the Battle of Gettysburg. The house offers extraordinary insights into the lives of the people of the town and how the Civil War, and in particular the Battle of Gettysburg, affected them. These insights are told through the eyes of the family who lived in the house during the battle: George and Hettie Shriver and their two young  children, Sadie and Mollie.

The Shriver House itself, which was built shortly before the war began, initially served as a saloon and bowling alley.  During the War, Confederate troops occupied the house, and the attic was used by sharpshooters.

The presentation will cover the restoration of the house as close as possible to its 1860's appearance after being abandoned for almost 30 years.  According to Nancie, the work began in January 1996 and was a grubby, backbreaking, eight-to-ten-hour-a-day, six-day-a-week undertaking, but it was definitely a labor of love. That winter also brought record breaking low temperatures, more than a hundred inches of snow and two major floods that made national news.

But the rewards far outweighed the obstacles, because each day brought about exciting new discoveries.  In addition to learning more about the Shriver family, they found countless treasures within the house - behind walls, underneath fireplace hearths, and below floorboards. Among the many artifacts discovered were  Civil War cartridges and percussion caps, toys, a "good luck" shoe, and Civil War medical supplies.

The restoration earned the Shriver House Museum the Pennsylvania Historical and Museum Commission's Historic Preservation Award. The Museum has also been used as a filming site for numerous television productions, including those aired by PBS, A&E, HGTV, BBC, CNN, the History Channel, and the Discovery Channel.

Nancie Gudmestad currently serves as the Director of the Shriver House Museum, which offers tours of the house and the surrounding historic area. 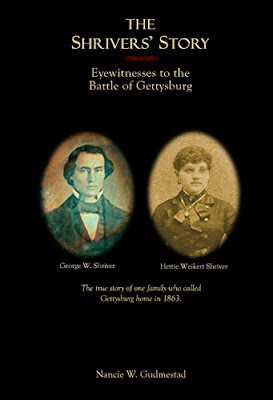 Nancie is also the author of a book on the Shriver family, The Shrivers’ Story: Eyewitnesses to the Battle of Gettysburg, now in its sixth printing.

Nancie and her husband Del moved to Gettysburg in 1984 and, prior to purchasing the Shriver Houese, opened the first Bed & Breakfast in town, The Old Appleford Inn.  They sold the Inn in 1989 and built Mulligan MacDuffer Adventure Golf, a 36 hole miniature golf course, which closed in 2017 after 30 years in business. The American Battlefield Trust plans to restore the golf course to its 1863 battlefield appearance.


For more information about the Shriver House, contact Nancie at: 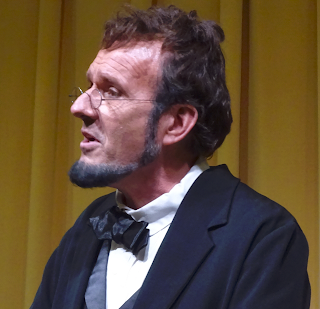 GEORGE BUSS
who will speak on
"Transforming into Lincoln: Life as an Abraham Lincoln Presenter"

8 pm: Lecture ($5 for lecture only)
Reservations Due By Wednesday, February 5th
(cancellations after the due date are non-refundable, as we must pay for the dinners regardless of the actual attendance)

SEE THE INSTRUCTIONS TO THE RIGHT OF THIS POST TO MAKE AND PAY FOR RESERVATIONS OR VISIT  http://cwrtdc-meetings.blogspot.com/
If you have any problems making reservations online or would like to know about alternatives to making reservations or payments online, please email admin@cwrtdc.org.
Non-CWRTDC members must make reservations and remit payment online

George Buss has been portraying Abraham Lincoln both locally and nationally for over 30 years, including at the Gettysburg National Cemetery Dedication Day held each November 19.  Harold Holzer, one of the country’s leading authorities on Abraham Lincoln, has said “No one brings Abraham Lincoln to life more brilliantly. George Buss is a national treasure."

In order to present a historically accurate Lincoln, Mr. Buss has immersed himself into the life and times of the role he plays.  He has researched a significant number of primary source documents and has visited many of the sites related to the Lincoln story. His frequent conversations with pre-eminent Lincoln, Civil War, and presidential scholars has added substantially to his interpretation.

For this joint Lincoln Group of DC and Civil War Round Table of DC dinner event, Mr. Buss will transform into Lincoln as he discusses life as an Abraham Lincoln presenter.


About the Speaker:
(from www.GeorgeBecomesLincoln.com)

George Buss is a native of Freeport, Illinois, home of the second Lincoln-Douglas debate.  He developed a keen interest in Abraham Lincoln beginning during his days in elementary school in the 1960's. He became familiar with the big stone house in Lena, known as "The Inn," where Lincoln stayed when he visited there.  And he treasures the memory of sitting on Lincoln’s shoe while dining at the “Lincoln the Debater” statue just outside Taylor Park school in Freeport.

Tall, thin, and bearded when he entered the teaching profession, George was frequently told of his resemblance to Honest Abe. In 1986, he made his first Lincoln appearance, representing the "Land of Lincoln" at a National Educational Association convention in New Orleans. Sporting the famous stovepipe hat, George led the Illinois delegation onto the convention floor.

From there, he collaborated with Richard Sokup, who portrayed Steven A. Douglas, and by 1993 the pair entered the national scene as Lincoln and Douglas interpreters. They worked together until 2004, when Sokup passed away.

George worked alone for the next few years and then formed a relationship with Tim Connors to perform “A Discussion with President Lincoln and Judge Douglas.” They now appear together regularly throughout the nation.


Today, George has turned his historical knowledge, educational background, theatrical experience, and love of all-things Lincoln into a full-time passion. He enjoys interacting with people from all walks of life – prominent Lincoln scholars, international celebrities, and regular people “like you and me.” At every venue he visits, George brings Lincoln to life with authenticity, reverence, and humor.

For more information about Mr. Buss, visit his website at www.GeorgeBecomesLincoln.com.

INSTRUCTIONS ON HOW TO MAKE RESERVATIONS AND PAY ONLINE

Please use the button below to pay online for your DINNER RESERVATIONS, MEMBERSHIP DUES or DONATIONS. The Round Table does not get access to your financial information, as this process is managed by PayPal.

For reservations and dues, select the items you wish to pay for by clicking on the down arrow/caret inside the box below the applicable line that says "Pulldown Menu." In the other boxes, please enter your and any guest's full name and add any messages or comments you might have for us. Although the boxes looks small, they accept up to 80 characters.

For donations, click on the "Donate" button, which will take you to a page where you may input the dollar amount you wish to contribute.

BE SURE TO CLICK THE GRAY "PAY WITH A DEBIT OR CREDIT CARD" BUTTON rather than the blue "Log In" button when you continue to the checkout stage if you do not wish to enter your userid and password to logon and pay using a PayPal account.

if you need a ride to the event, please email admin@cwrtdc.org for more information and assistance. We welcome all to our meetings, and we will send you information about possible options. We hope to see you there!

Use module above to make and pay for dinner meeting reservations